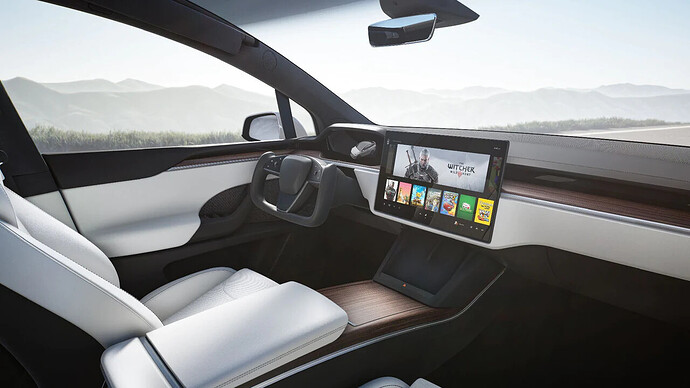 image1280×720 143 KB
You shouldn’t take a call while driving, you shouldn’t text while driving, and you certainly shouldn’t game while driving. And yet, that’s exactly what you might be able to do with the Tesla Models X and S. As spotted by The Gamer, bazillionaire Tesla CEO and failed Deus Ex cosplayer Elon Musk all but said as much this week.

On Monday, at the annual Computex trade show, AMD CEO Lisa Su took the stage for the company’s keynote, where she detailed what’s new and next for the semiconductor company. “You might be surprised to learn the next place you’ll find RDNA2 graphics. It’s actually on the road, in the electric vehicle market, with the new Tesla Model S and Model X,” Su said, before diving into a string of technical terms and jargon (though she did note that these cars will hit “up to 10 teraflops of compute power”).

In (where else?) a tweet yesterday, Musk said that the Model S and X “have PS5-level entertainment computing power.”

This isn’t the first time Musk, a noted memester, has claimed the Tesla Model S and X can support high-fidelity games. In January, he tweeted that the Model S “can play Cyberpunk.” But it’s not always easy to take, at face value, the word of someone who, in March 2020, said that coronavirus cases in the United States would be “close to zero” by April 2020; who said that the stock price of the company he leads is “too high imo”; who once called a literal hero a “pedo guy.” So, yeah, the general consensus around that Cyberpunk claim rightfully amounted to one big collective suuure, bud.

But with confirmation directly from AMD — and, more specifically, Su, who has curated a reputation as a careful, measured spokesperson for the brand — the notion that a built-in entertainment system for an electric vehicle could play a visually demanding role-playing game holds a lot more water. Hey, Cyberpunk 2077 might not run so great on PS4 and Xbox One, but it plays reasonably well enough on next-gen consoles, which have significantly lower computational firepower than what AMD is bringing to the Tesla table. So if games started being ported to Tesla’s in-car entertainment systems, Cyberpunk could theoretically be among them.

But it probably still wouldn’t be a great idea to actually play it there. According to Car & Driver, you’re officially locked out of the system while the car is in motion, though Tesla enthusiasts occasionally traffic in workarounds, which could be distracting to the driver even if deployed by passengers. According to figures cited by the U.S. National Highway Traffic Safety Administration, automobiles are responsible for more than 36,000 deaths nationally per year.
News comes from Apparently Tesla Cars Have Enough Graphical Horsepower To Play Cyberpunk 2077