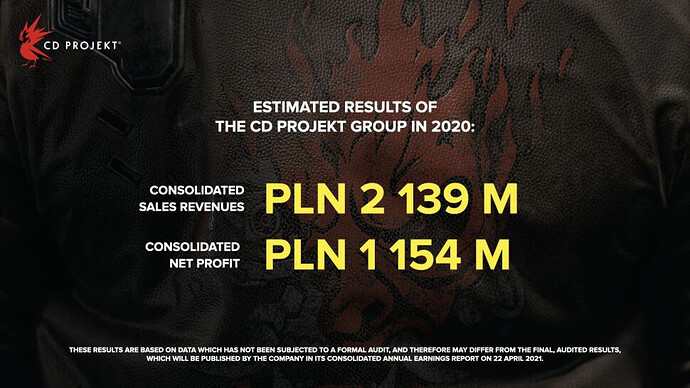 image970×546 122 KB
CD Projekt is due to publish its annual consolidated earnings for financial year 2020 on April 22, but decided to give an early preview of how it performed on its investor-focused Twitter account. The answer: rather well, with estimated sales revenues of 2,139 million PLN ($563 million USD), and a projected net profit of 1,154 million PLN ($304 million USD).

That’s substantially higher than previous years. For the sake of comparison, off the back of the release of The Witcher 3 in 2015, CD Projekt earned 798 million PLN ($210 million USD) in revenues with a profit of 342 million PLN ($90 million USD).

CD Projekt released its estimated earnings for 2020 today. It is currently projecting revenues of 2139 million PLN and net profit of 1154 million PLN.To put this into perspective I’ve included a history of CDPR revenues from 2014 - 2020. pic.twitter.com/E7eLqC0S58April 15, 2021
CD Projekt expecting record profits isn’t surprising since Cyberpunk 2077 managed to earn back the costs of its marketing and eight years of development in a single day, and had the biggest PC launch in history. The many problems it had at launch—it’s still unavailable on the PlayStation Store, having been removed in December—will affect how CD Projekt does business in the future, however. CD Projekt SVP of business development Michał Nowakowsk said in a recent strategy update video that the company’s games won’t be marketed until they are “much closer” to release from here on out.