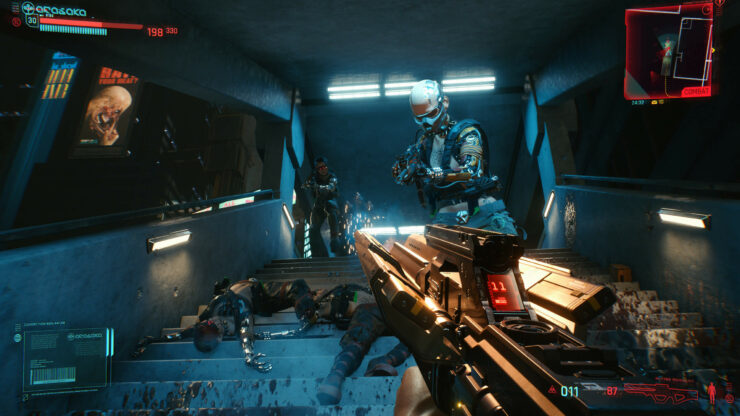 A new Cyberpunk 2077 hotfix is now live on PC and consoles, fixing a specific quest issue and introducing improved stability on consoles.

The 1.06 hotfix fixes a Second Conflict quest issue, improves memory management and stability on consoles, and removes the 8 MB save file limit on PC, which should result in save files no longer getting corrupted.

Removed the 8 MB save file size limit. Note: this won’t fix save files corrupted before the update.
The previous Cyberpunk 2077 hotfix was definitely meatier, as it introduced several bug fixes as well as console and PC specific fixes.

[AMD SMT] Optimized default core/thread utilization for 4-core and 6-core AMD Ryzen™ processors. 8-core, 12-core and 16-core processors remain unchanged and behaving as intended. This change was implemented in cooperation with AMD and based on tests on both sides indicating that performance improvement occurs only on CPUs with 6 cores and less.
Fixed an issue with the way Raw Input is collected.
Removed the use of AVX instruction set thus fixing crashes occurring at the end of the Prologue on processors not supporting AVX.
Removed debug console to prevent functions that could lead to crashes or blocked quests. This doesn’t mean we don’t want to support the modding community. Stay tuned for more info on that.
Ray traced reflections should no longer seem too bright in comparison to the environment.
Fixed an issue with Steam Overlay crash on game shutdown.
Removed the memory_pool_budgets.csv file. which was not connected with the final version of the game and had no influence on it (it was a leftover file used during the development to estimate memory usage. It had no effect on how much memory was actually allocated). Perceived performance increase after editing the file may have been related to restarting the game.
Cyberpunk 2077 1.05 Console-specific

Improved image sharpness with Chromatic Aberration and Film Grain on.
Settings should no longer reset to default after several game session restarts.
Fixed visual issues occurring during the transition between The Heist and Love Like Fire.
Corrected the look of several vehicles.
[Xbox] Entering combat while Synaptic Accelerator is active no longer ends in player health bar not being displayed.
[Xbox] Game no longer becomes unresponsive when signing out from a profile when the controller disconnection message is visible.
Telemetry consent request will appear once more due to an earlier issue with settings reset.
Fixed an issue whereby it was possible to fall down the elevator shaft in Megabuilding H8 in Automatic Love.
Cyberpunk 2077 is now available on PC, PlayStation 4, Xbox One and Google Stadia.