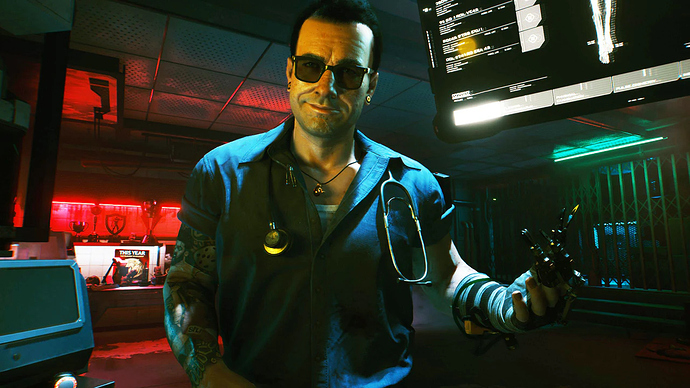 Cyberpunk 2077 is a game set in a cyberpunk future that begins with an incredibly robust character creation suite, letting you modify everything from your cybernetic implant appearance to facial scars to the size of your dick. Almost every single person in the game is a mechanically modified human being. Within the first 25 minutes of playing you have new robot eyeballs inserted in your skull. But once you actually get into the game, you can’t change the appearance of any of this.

You can’t even get a haircut.

Even Geralt of Rivia, an entirely pre-built character living in a world where a peg leg was the height of bodily modification, could get a haircut! Animal Crossing lets you get a haircut! But here, in a dystopian future where entire body parts can be swapped out for newer models, I can’t even change the colour of my eyes. All I can do is change outfits. That’s…odd!

Yeah, it’s a first-person game, so you don’t see yourself as often as you did in The Witcher 3, but you still see certain parts of you a lot. And the option is definitely there to look at yourself in a mirror, to the point where CDPR have implemented a little facial expression system so you can check yourself out in extended detail.

The fact you’re stuck with the same appearance you made at the start of the game, despite all the promise and expectation inherent in the setting, is absolutely wild to me.

I’m not mad at this — the last two Deus Ex games shared a similar setting and didn’t let you change much either! — I’m just fascinated. Mostly in how this is just another example where the developers have shown that it was the aesthetic of cyberpunk they were going for here, not the finer points of the subject matter itself and what it’s trying to explore.

Anyway, if you haven’t started the game yet, or you’re early in enough that you wouldn’t mind restarting, keep this in mind before rushing through the character creation suite like I did, just expecting to be able to change things. Because you can’t.

This article was originally published in December 2020.

News comes from Cyberpunk 2077 Doesn't Let You Change Your Appearance Once You've Started.