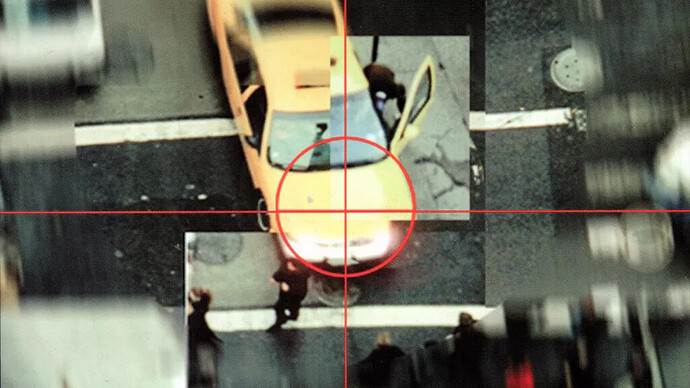 image1024×576 164 KB
Society is in rapid decay. With the crime rate soaring and biochemical dependency in healthy proliferation, you are about to have the time of your life. The city is on the edge of collapse, with law and order beginning to break down completely. People are running wild, half-addled on food additives and semi-legal pharmaceutical pills. A giant corporation controls every aspect of society, from entertainment to organ transplants. Everything is polluted, dirty, unpleasant. Life has never been cheaper.

It’s a premise that belongs in a sourcebook for Cyberpunk 2020. Instead, improbably, it’s the way Rockstar chose to introduce GTA 2. Just two years before the series unfolded in three dimensions, expanding its audience in kind, the mainline Grand Theft Auto was a rock ‘n’ roll sci-fi dystopia.

GTA 2 belongs to an experimental period in the late ‘90s, when Rockstar believed the series could be basically anything. Earlier the same year, the publisher had released GTA: London 1969, a reggae-soundtracked tribute to The Italian Job. Rather than a recognisably real American city like LA or New York, GTA 2’s backdrop is ‘Anywhere, USA’—a post-industrial deathtrap where corps sells their drugs with slick ads on the radio, while openly engaging in factional warfare on the streets. Unless you change the setting in the launcher, the place exists in a state of perpetual dusk. Talk about Night City.

The resemblance to Cyberpunk is undeniable, and alluring at a time when players are still craving the chaotic open world CD Projekt Red promised. Although the developer more-or-less delivered on a satisfying RPG story told by interesting characters, launch week was defined by images of cops clumsily spawning directly behind players like pantomime actors, or halfway up the side of steep buildings like mountain goats. Worst of all, they proved incapable of car chases, the bread and butter of urban action.

GTA 2 may be incapable of a two-sided conversation, but it does all that cop caper stuff by default. It’s built on the Wanted system that fuelled GTA from the beginning, and was the first entry to introduce FBI and army response levels, nailing the sense of overwhelming escalation that’s been a fixture of the series since. There’s even a subtle detection meter: rather than stars, GTA 2 displays cop heads, which shake disapprovingly if the authorities know your location.

Once the sirens die down, you can get the best sense of GTA 2’s world from its radio—a surrealist and dreamlike source of daft comedy that drifts in and out of signal as you travel under bridges and emerge from tunnels. Skipping records segue into yodelling into news about a rock band called Sticky Fingers, whose hotel room destruction is so extreme it claimed 18 lives in an explosion. 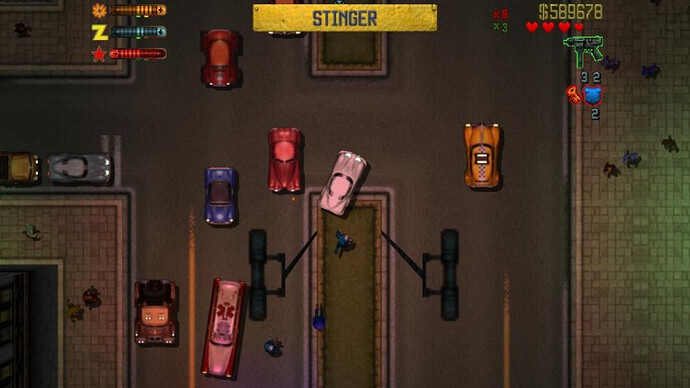 image970×546 87.5 KB
DJs with names like Tomba Bomba and Johnny Starrock—including a couple who would be considered racist caricatures by modern standards—burble bitterly about car theft between the ads, which invariably feature drugs and medical procedures.

There’s Genie, the syrup to alleviate everyday life that promises “peace and love, straight from a bottle”; Perk Up, the liability-waiving pill to tackle “flopsy”; Hush, the mind-quieting sedative that leaves users “medically dependent after 28 days”; and Ceramo-Teeth, which enable the safe consumption of a corrosive soft drink, Coco Fizz.

The latter three are all products of Zaibatsu, GTA 2’s answer to the influential Cyberpunk megacorp Arasaka. This pharmaceutical company’s drugs are dedicated to blocking out a horrendous world it helped shape. There’s a certain dark glamour to their heavily armed Z-men, not to mention the superfast Z-cars they travel in—all black apart from their favourite letter, slashed in yellow on the roof. All of GTA 2’s vehicles have a retrofuturistic bent, and the Z-type bears the distinguished nose of a 1937 Bugatti. 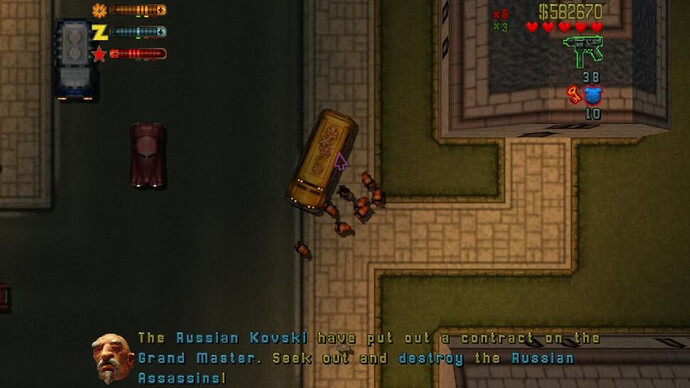 image970×546 85.9 KB
It’s possible to spend the whole game running missions for Zaibatsu. In a world where staff poaching takes the form of literal kidnapping, the corp likes its business solutions to be direct and bloody. Behind the commercial front, the pharma giant is locked in an arms race; one Z mission tasks you with stealing a new flamethrower developed by the SRS, a faction of rogue scientists whose rank and file are disposable clones.

Simultaneously, Zaibatsu is funding a radio competition to win a free five-star funeral—“No embarrassed kids at the graveside”—presumably as compensation to all the citizens killed in the crossfire of its gang wars.

As in Night City, the dive into dystopia has caused an inverse rise in religious conversion. The Hare Krishnas, real life adherents of yoga and Hindu scripture, were the target of the original GTA’s notorious GOURANGA! hit-and-runs—selected by writer Brian Baglow because he found their airport recruitment drives annoying, and because they were “not likely to sue”. But the Krishnas get their revenge in GTA 2, as a populous armed faction tackling the city’s pollution problem, one crushed car at a time. It’s the ultimate Grand Theft Auto, in a way. 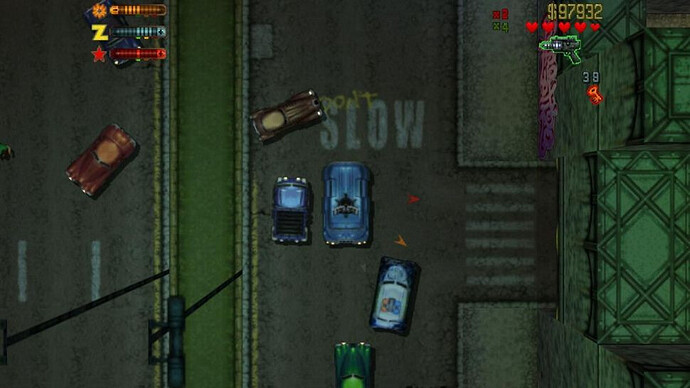 image970×546 88.5 KB
Dan Houser took over writing duties from Baglow for GTA 2, bringing sci-fi flavour to missions that are mostly standard GTA fare. On any given day you’re still probably going to be picking up a traitor and driving them to the docks so they can be lifted by crane into the sea. But you might also be killing precisely 47 Zaibatsu thugs to achieve an acceptable statistical median, or remote controlling a prototype taxi, or turning pedestrians into hotdogs, or stealing AI brain units from the Russians.

Ultimately, this was a vision for GTA that was better left behind—eternal dusk can’t beat sunrise over Los Santos, and contemporary US culture has proven a much deeper well of satire for Houser and his co-writers. But if you ever spot the Z-type nosing its way through GTA V, or hear an advert for a Zaibatsu drug on the radio in GTA III, you can marvel at that brief moment in time when GTA was a cyberpunk game.