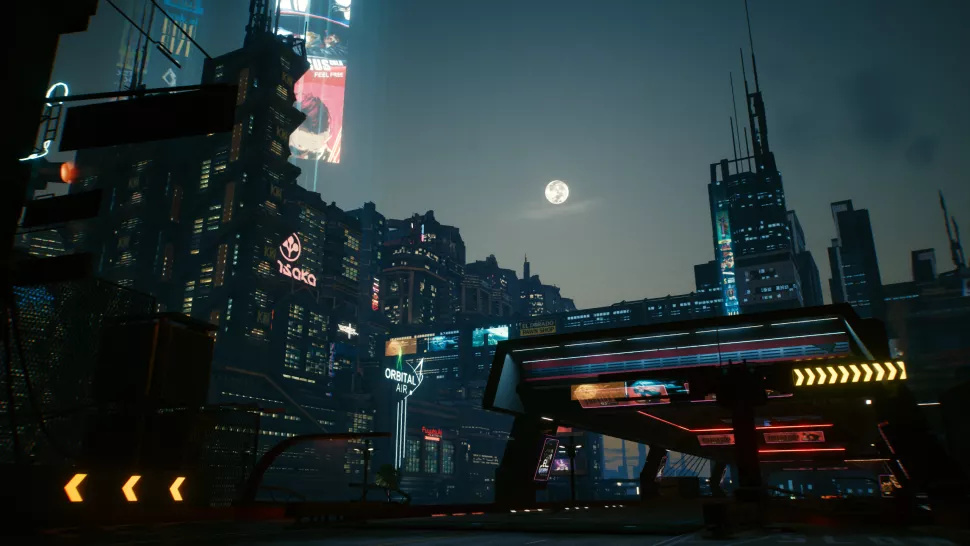 I’m on an aimless walking tour of Night City. Somehow I’ve ended up in the Japantown neighborhood’s Arasaka-financed streets, where animated billboards for “Sweet Clean Speed” and pornographic braindances climb the flanks of utilitarian skyscrapers, blotting out the stars with a rainbow of neon. I pass a ramen shop, a hot dog stand, and a man selling spice, piles of garbage tucked beneath the offramp behind him.

A mob of Christians gather at a nearby intersection, waving signs and screaming “Blasphemers!” at the cops. A voice makes booming proclamations in Japanese from loudspeakers overhead, flying cars crisscrossing the invisible roads between buildings. The sky glows with light pollution, but the moon is full and clear. It’s a beautiful night.

I just left Judy Alvarez’s place. My friend’s been through a lot lately. Someone close to her has been victim to a string of horrors including sexual assault, physical trauma, and suicidal tendencies. We had a big heart-to-heart about it, undermined by the presence of elaborate arm-knife crosshairs fixed on her forehead even though I put my arm-knives away earlier (I’m polite like that). There was also the notification from that fancy sniper rifle I picked up 20 minutes ago, still notifying me that I picked up a sniper rifle. Duly noted, notification.

But hey, Judy’s not perfect either. I’ve seen her clip through chairs and float across the room while confessing something deeply personal. And yet, I am duty bound to stick through the bugs for my friend. I genuinely care about her.

She’s on my mind while I continue my walk through Night City. Ahead, a streetlamp floats in the air, its base failing to load. A busker plays an invisible guitar. The facade of a skyscraper flickers briefly. Something ain’t right, so I call my car and it arrives in classic Roach style, driving through a concrete barrier, screeching to a halt. As I approach, a van spawns in the same space and the two vehicles fight to exist before my taxi spurts out and knocks me to the ground. Should I call Judy, see if she’s hanging in there?

It’s just another day in Cyberpunk 2077, a pretty good RPG in an amazing setting absolutely sick with bugs.
News comes from https://www.pcgamer.com/cyberpunk-2077-review/.