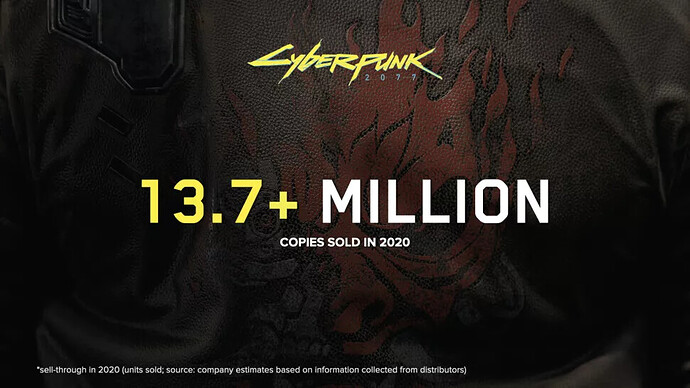 image970×546 119 KB
By most measures, Cyberpunk 2077 was (and still is) a big disappointment. But it was also a major sales success for CD Projekt, which said today that more than 13.7 million copies of the game were sold in 2020, more than half of them on PC and Stadia.

56 percent of Cyberpunk 2077 sales went to PC and Stadia, according to figures revealed in today’s full-year financial report, while the PS4 accounted for 28 percent and the Xbox One claimed the remaining 17 percent. Across all platforms, nearly three-quarters of the copies sold—73 percent—were digital. That helped propel GOG, CD Projekt’s digital storefront, to what was far and away its best quarter, and best year, ever.
CD Projekt president and joint CEO Adam Kiciński acknowledged in a management report that Cyberpunk 2077 got off to a rougher start than anyone expected, but defended it as a creative endeavor and reiterated the studio’s promise to stick with it.