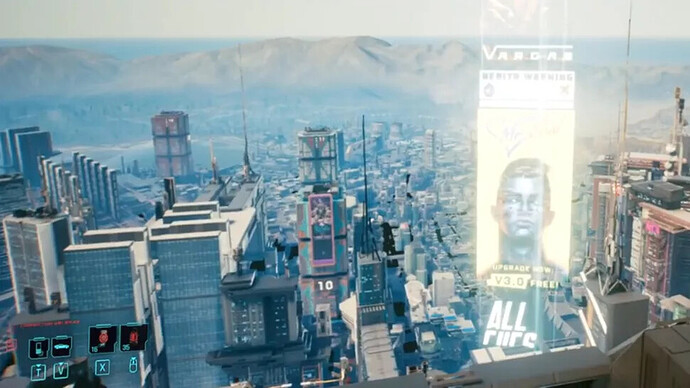 image970×546 120 KB
The view from the highest point in Cyberpunk 2077 is stark, beautiful, lonely, and deadly, and now you can enjoy it for yourself - unless you have acrophobia, in which case you probably won’t enjoy it very much.

The view from the top of 'saka tower from r/cyberpunkgame

Reddit user Spunky Monkey shared the video, captured from the very tip of Arasaka Tower, the tallest building in the Night City skyline. That’s saying something, since downtown Night City is pretty much made out of skyscrapers. You can see every part of the city from up there, and far beyond - from the bluffs beyond the accessible wasteland area to the monolithic towers standing their silent vigil in the bay.

The star of the show is still Night City proper, and from up there it’s easy to admire the contrast between the sharp and futuristic architecture and the humongous banner ads that stand tallest of all. Even from the very pinnacle of Night City you can’t get away from the ads.

Under normal circumstances, you’re only able to access that particular rooftop during a mission, meaning you don’t have much time to chill out and admire the view. But that’s what Cyberpunk 2077 mods are for!