Mike Pondsmith was this year’s Storytime guest at PAX Online, and he was there not just to share anecdotes about his lifelong love of games, but also give advice on how to become a game designer.

He’s best known for making classic tabletop role playing game Cyberpunk, which serves as the inspiration and base for one of this year’s most anticipated video games, Cyberpunk 2077.

The relatively brief panel started with Pondsmith talking about how his love of games grew and evolved through Chain Mail and Dungeons and Dragons. He actually met his wife, Lisa, while playing in a D&D game GMed by her then boyfriend, who kept trying to kill off his character. They’ve been married for nearly 40 years, and she was the one to invent the Bozos in Cyberpunk; the terrifying clown gang responsible for killing many, many characters over the years.
His interest in designing games himself started when he began modding the first legendary Traveller black box.

“When you do game design at the level I do it at, that is a large part of what you are doing. You’re doing more than just manipulating rules, you’re creating a world for other people to enjoy. And, when they do, if they have a good time, if they come back, if they want to change and bring things that are personal, you’ve done your job right. But you have to make that quantum leap from a player to a GM to a designer, and a designer thinks in much larger meta.”

After playing the game for a long time, Pondsmith eventually had the chance to meet his game design hero, creator of Traveller, Marc Miller. From Miller, he learned two very important things:

“Every designer looks at something they did and [asks] ‘how could I have done that better? What was missing? How do I bring forward that style and that feel? How did I miss that?’”
Game designers, in the tabletop world at least, are friendly, and he sees it as his responsibility to pass on advice and answer questions, just as people did for him when he was starting out. “If you’re open to asking questions, if you’re open to listening to advice, people will support you. You will find people in the industry who are right behind you.”
But, interestingly, he said that video game designers aren’t as nice as tabletop ones.

“That’s partially because video games are a little more like Hollywood — the stakes are ridiculous, and there’s a lot more of a problem with reaching and talking to fans directly. There’s a wall there between you and the people who use the game,” he said.

“But some of that distance is because I can still go and make a pretty good [tabletop] game and spend $10k at the most to get it printed, but when I went to make my first pretty large video game project I went in and asked ‘what are we budgeted for’ and they said ‘twenty million dollars’. And I [thought] I am now responsible for figuring out what to do with twenty million dollars, so the stakes are higher. 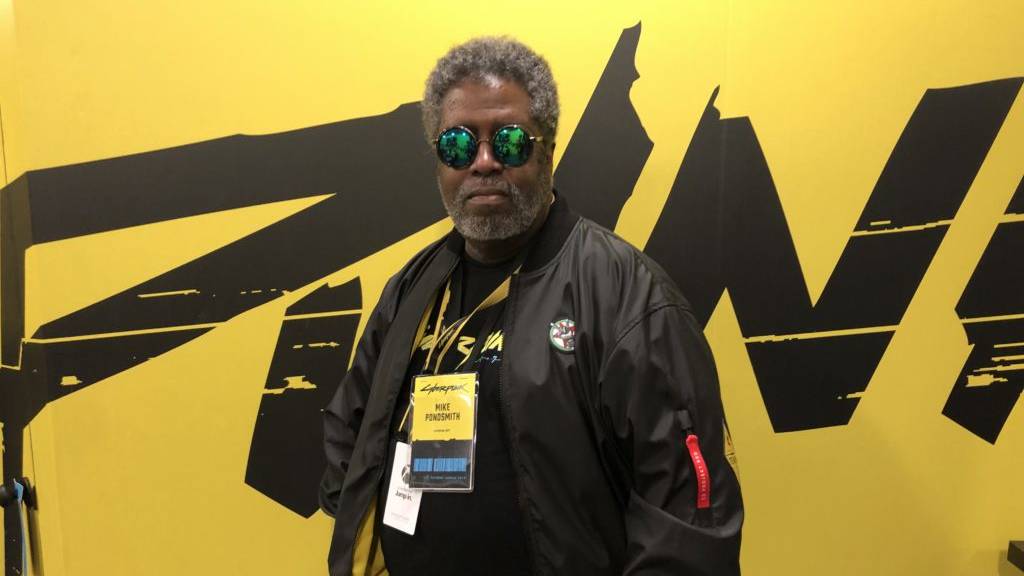 mike-pondsmith-11024×576 46 KB
“But be that as it may, even in video games you’re going to meet people (though, fewer of them) who are going to talk to you about how to do this mystical thing we call game design.”

Another pearl of wisdom is that the design community loves conventions just as much as the fans, because it gives them a chance to try out each other’s new games. “Everybody in the business likes to mess with everyone else’s stuff. And even though there’s the business side of it, we do this because we love doing it,” Pondsmith said.

For those at home wanting to know Mike Pondsmith’s five key pieces of advice, beyond just “stumbling into it”, here’s the secret:

“Ask yourself, do I love this? Do I walk into the store and go ‘hmm new game’ and want to play it? Do I have passion for this stuff?”
But it’s more than just wanting to play the game. “You’ve got to walk in there and not just go ‘wow, that looks really cool, I want to buy that’. You’ve got to look at it and wonder how they did that. You have to have the passion to figure out what’s behind the game you really like.”
“When I started, people said there was never going to be any new RPG companies. We’ve all got it wired with D&D, Call of Cthulhu, and Traveller. Cyberpunk proves that’s not true, as well as Vampire: The Masquerade and other games out there. You have to learn to say ‘Yeah, I’m going to do this anyway.’… If you want it, you have to go get it.”
Ignore the naysayers and guardians of the hobby. “There are people who are gatekeepers in the hobby, but they’re not the ones making the games. Pros will give advice. They’re not afraid to see a really good thing, because it makes the whole hobby, the whole business better.”
“Make the game so you can see it, and do not be afraid to take it out, put it front of other players, and have them take it apart if need be. That’s the only way you’re going to get a better game… At that point you don’t need my OK, you’re a game designer. You may not be a finished game designer, you may not be a rich game designer, but you will be a game designer.”
To learn more, watch the video below, and keep an eye on the Pax Online schedule to hear from more experts in the industry.