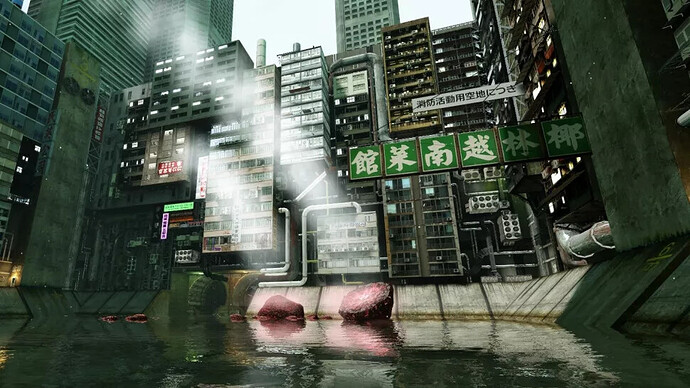 image970×546 175 KB
Remember NeoTokyo? It was a futuristic multiplayer game that started life as a mod before earning a standalone release on Steam all the way back in 2014. The Neotokyo developers went onto work on some cool projects. Artist Leri “pushBAK” Greer since moved on to work for Weta Workshop and turned his talents to creating concepts for the Ghost in the Shell live action movie, and composer Ed Harrison went on to create music for Deus Ex.

The game also inspired modder SerygalaCaffeine to build a Half-life mod to celebrate NeoTokyo’s gritty universe. It promises to be “a crossover between the Universes of Kshatriya and NeoTokyo Source” created with Greer’s blessing, and you download a demo featuring the first three levels from ModDB.

You can take multiple routes through the mod’s crumbling and very nicely lit tower blocks. It’s a world of neon signs and cracked old concrete—the perfect hideout for some augmented criminals. There’s some shooting of course, but the city itself is the star, and a great way to stretch Half-Life 2’s old engine.

The Kshatriya nod refers to the creator’s previous game, Kshatriya: Wetwork, built with GameGuru. One of the two levels is linear, but the other features an open environment with multiple paths, which seems to have informed the design of the NeoTokyo crossover mod. You can grab Wetwork for free on IndieDB.
News comes from https://www.pcgamer.com/fight-through-a-demo-of-cyberpunk-half-life-2-mod-neotokyo-kshatriya/