Here’s A Look At The Cyberpunk 2077 Perks System 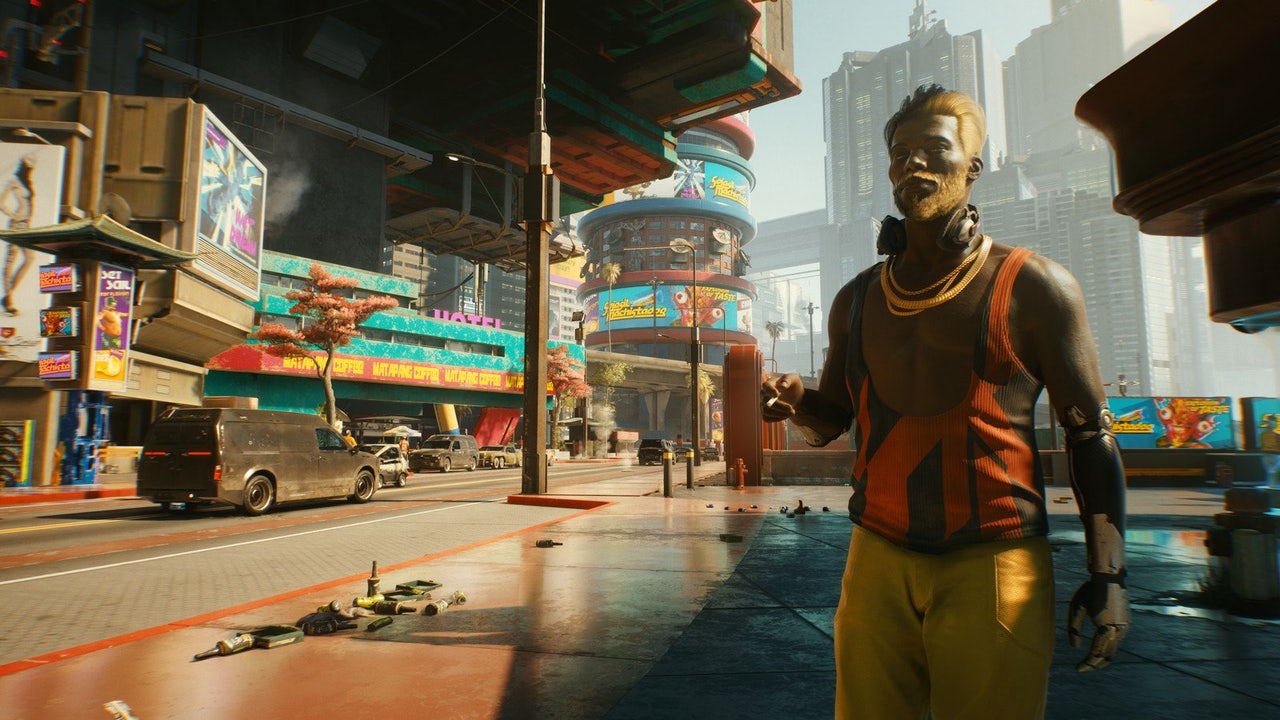 We had a hands on with Cyberpunk 2077‘s RPG and perks system earlier this year. Little gameplay footage has actually been released publicly of the system, but today we got a good look at what to expect.

The last official gameplay trailer for Cyberpunk 2077 dropped this morning, shown at the end of the final Night City Wire livestreams. It’s a much longer gameplay trailer — about 5 minutes long — and there’s a good chunk of environments, footage and some new characters to check out.

But about halfway through the trailer, we also got a look at the perks system and what you can expect when the game launches on December 10. 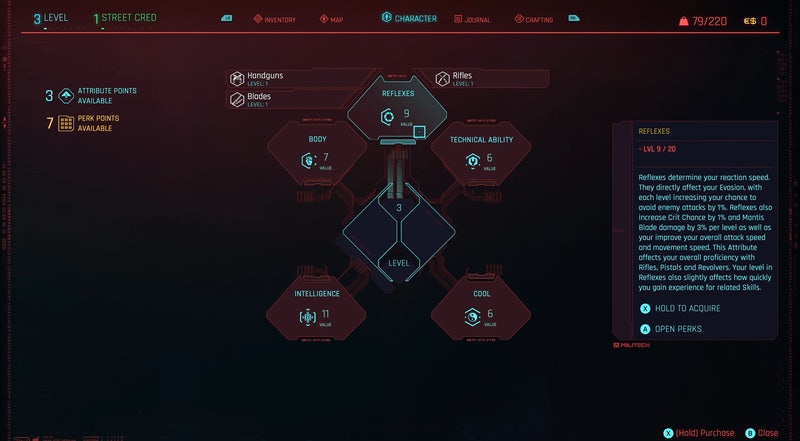 As outlined in our original playthrough, every Cyberpunk 2077 character will have attributes and perks. Attributes are like what you’d expect from a sci-fi RPG: they’re the base points you put into major skills like dexterity, stamina, intelligence and so on.

In Cyberpunk 2077, those attributes fall under Cool, Intelligence, Technical Ability, Body and Reflexes. Each attribute can be levelled up to a maximum of 20, and every attribute also has a related impact on a certain series of perks.

More points in Reflexes, for instance, will improve your damage with rifles, handguns and blades. Your proficiency with each weapon also increases the more you use it — just like Don Bradman Cricket — and every major attribute has its own set of related perks. 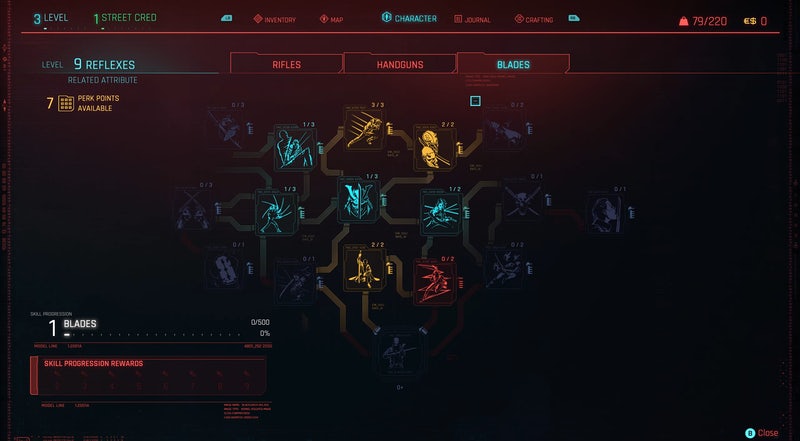 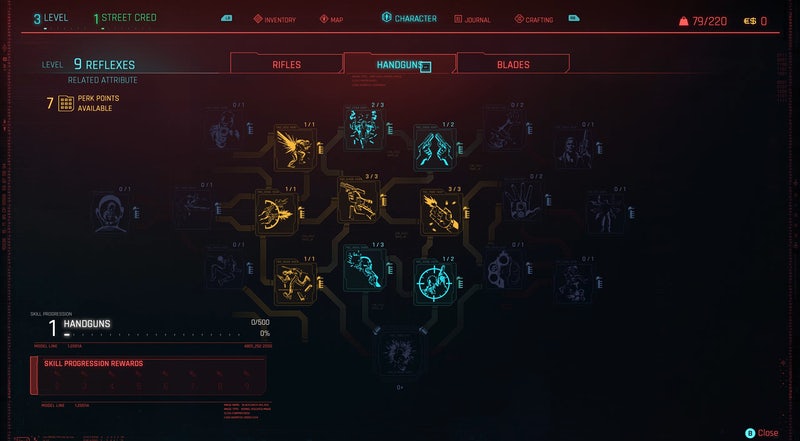 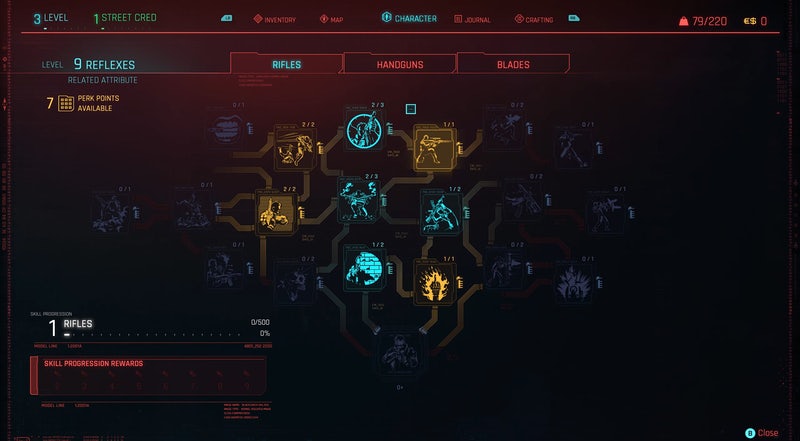 800×441 41.7 KB
The three above are what you’ll find under Reflexes, but there’s a massive amount to unlock in-game. In case you’re wondering what the possible permutations are, here’s a snippet from our original preview:

And there’s a lot of perks. For the Cool attribute, you’ve got a Stealth Page and a Cold Blood page. There’s 26 different Stealth perks and 19 Cool Blood perks to choose from, and most of those have multiple levels.

The same goes for other attributes. Technical Ability — or TECH — has Crafting (19 perks) and Engineering (22). Reflexes has separate branches for each of the main weapons: Blades (23), Rifles (20) and Handguns (19).

I was playing an assassin-type, so I focused on the Cool skills. All the choices there were pretty good: Improving critical chance by 15 percent; a global 15 percent/25 percent damage bump to human and mechanical enemies; 30 percent faster move speed while sneaking; unlocking aerial takedowns; unlocking the ability to throw knives; or just getting more movement speed generally after a takedown.

And that’s just the Stealth perk line. Want to be a better hacker instead? Then you can unlock the ability to breakdown turrets. Increase your Breach Protocol buffer. Get better hacking programs. Or maybe you just want faster aim time. Better headshot damage with handguns. Health regen during combat. Double the carrying capacity.

The gameplay trailer below also shows off a bit more of the in-game hacking system. There’s also a fairly substantial plot point revealed in the first several hours of the game — it’s something CD Projekt Red have spoken about before, but it’s worth knowing if you want to go into the game completely spoiler free. (It will reveal the origin of Johnny Silverhand’s entrance to the game, FYI.)